Sri Poornimaji’s satsangs in US 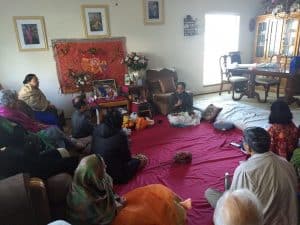 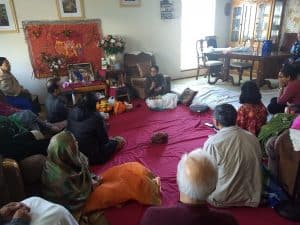 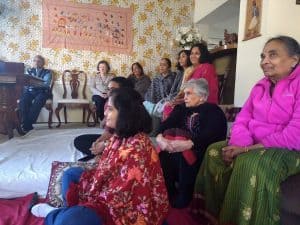 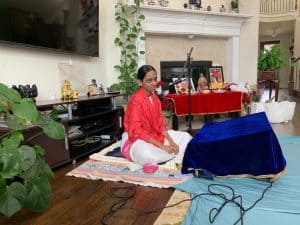 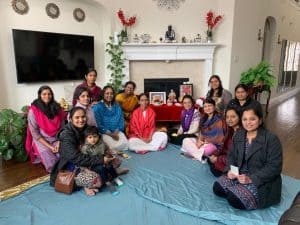 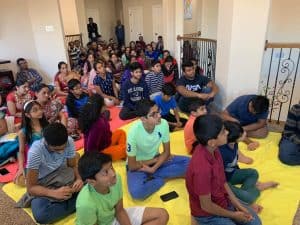 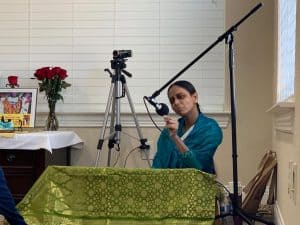 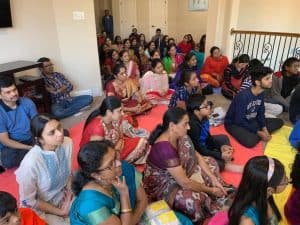 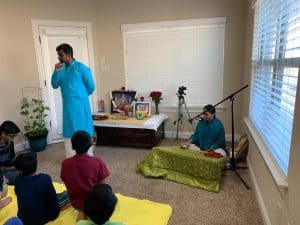 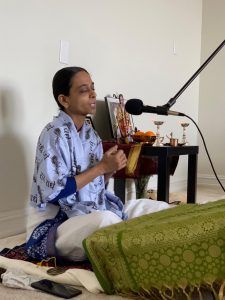 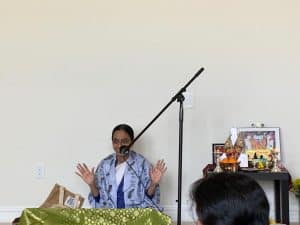 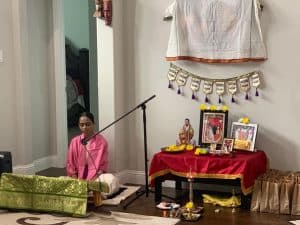 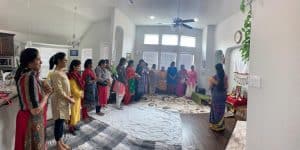 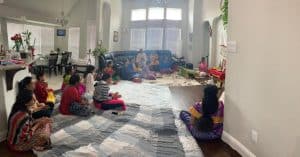 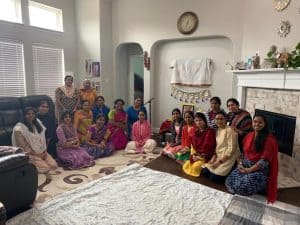 Sri Poornima ji’s 4-Day discourse series on ‘Bhagavan Namakirtan’ was well received by around 55 to 60 new families by immense krupa of Sri Swamiji. The 4 home satsangs took place in the Frisco and Little Elm areas of DFW metroplex on Feb 21st, 24, 25 and 26.

Sri Poornima ji addressed different sets of people on all 4 days. She addressed devotees that took to chanting the Mahamantra for the past few months regularly and also addressed many new families. She discoursed on the glories of chanting the ‘Bhagavan Nama’ by beautifully weaving in instances from the life stories of Indian saints of Bhakti marga like Sri Thyagaraja Swami, Sant Meerabai, Sant Tulsi Das and more. 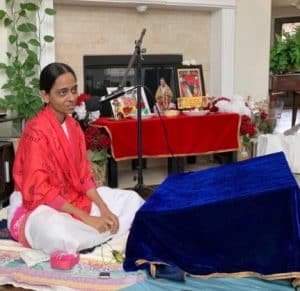 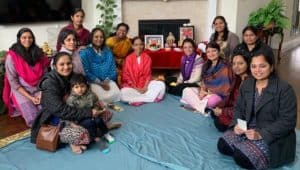 Day 2 – The discourse took place at Smt. Chandana, Sri. Narendranath ji’s place in Frisco in the afternoon. Sri Poornima ji spoke about Thyagaraja Swami charitra so beautifully weaving so many apt compositions of his at right places. More than 40 families with kids joined the discourse and were in rapt attention to her. The whole place was silent for the entire 2 hours. 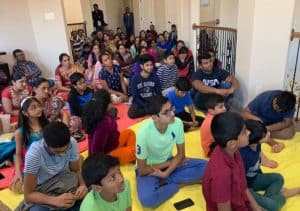 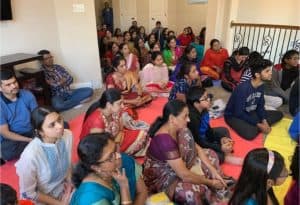 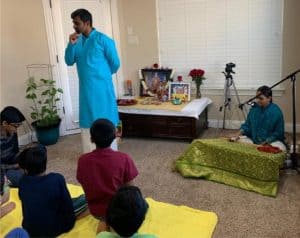 Day 3 was at Smt. Swathi, Sri Srinivas Raoji’s place in Frisco in the morning. Sri Poornima ji discoursed on the essence of Sanathana Dharma and how we should hold on to chanting in our daily lives and encourage others in destress to chant. She explained the profound term ‘Moksha’ in a very simple way that everyone could understand. She further explained about what Nama does to us – cleanse us and make us a better and happy person. Around 16 to 18 devotees joined the Satsang.

Day 4, last day of this discourse series took place at Smt. Gnanalakshmi, Sri Gunasekaran ji’s place in Little Elm. Here, she quoted interesting instances from Mahabharata and Sant charitras that brought out the greatness of ‘Bhagavan Nama’. She further talked about how we will have Bhagavan with us the minute we start to chant His Divine Names. The session ended with Mass Prayer. Special prayer for our Indian martyr soldiers and for the safety of India was done. Around 20 to 22 people joined the Satsang.

The first discourse was held at the residence of Sri.Dhilip and Smt.Shanthi in San Ramon, CA on Friday, March 1st 2019. She began the discourse with the greatness of satsang and that everyday is indeed an auspicious day when one is in a satsang. She also added that the right age to start attending satsangs is when one is five years as told by Prahalada, verily because when one starts following the sweet path of Bhagavata Dharma at an early age, the child will be prepared to meet the challenges of the world in the later age. Akin to how one applies oil before peeling the jackfruit, one needs to chant the divine names before entering the world, so that one can be in the world but not off the world. Poornimaji gave a very nice definition of Moksha that everyone related easily. She told Moksha is a state that is devoid of sorrow and that one need not attain moksha after death. Moksha can be an experience when one is alive and when one comes to satsang and chants the divine names, satsang will make one realize that he or she is verily that joy and that happiness is right in every individual. Satsang lucidly shows the precept that true joy is right within every human being. The satsang was attended by about 60 devotees and everyone truly enjoyed the Nama Prabhavam discourse. The satsang concluded with Mahamantra chanting and Harathi.

The second day discourse on Nama Prabhavam by Sri Poornimaji was held at Sankata Mochana Hanuman temple on Saturday, March 2nd 2019 from 5:15pm to 6:45pm. She beautifully began the discourse by reminiscing Lord Hanuman, who loves to hear the glories of the Lord and that’s the very reason for Lord Hanuman to stay back on the earth. It is said that Lord Hanuman is present wherever there is chanting of divine names and exposition of Lord’s glories. The topic for the satsang was ‘Nama Parathe Sadhana Nahi’, which is a line from Sant Tukkaram’s abhang, which means that there is no other path or Sadhana in this age that can bestow one with all auspiciousness. Nama Prabhava is seen in Srimad Ramayana from that very moment Lord Hanuman’s entry, who lived and breathed Rama Nama. He believed that Nama is no different from the Lord and hence he was able to perceive the Lord effortlessly. Only one who has Nama within him or her can do anything as an loving offering for the Lord.  After the beautiful exposition of the greatness of Nama with reference to Lord Hanuman, Sri Poornimaji then wonderfully talked about the life-history of Sri Sridhara Ayyaval and how he chanted the divine names of Lord Shiva. Close to 100 devotees attended the discourse with rapt attention.

The third day discourse on Nama Prabhavam by Sri Poornimaji was held at the residence of Sri Shrikant and Smt Srividya Srikanth in Concord on Sunday, March 3rd 2019. Sri Poornimaji began the discourse addressing the devotees that they were indeed blessed to be taking part in the satsang amidst their worldly chores and enlightened the devotees that the term ‘satsang’ refers to company of divinity. ‘The term ‘Sat’ refers to truth, and truth is indeed the Lord.  It is said that the Lord would bestow one with anything but not satsang. A true satsang is one where one hears and extols only about Bhagavan. After extolling the greatness of Satsang and the divine names, she then wonderfully narrated the charitra of Sabari from Srimad Ramayana. She concluded that the greatest treasure that we all have been bestowed is chanting the divine names and exhorted everyone to chant the divine names everyday.Close to 60 devotees attended the discourse and chanted Nama with awe and reverence. The satsang concluded with Harathi. 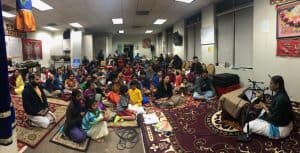 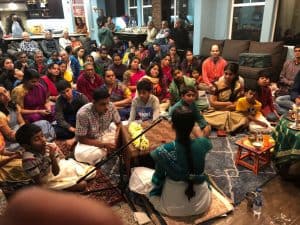